What is the Story Behind Mahi (Fish) Motif in Persian Rugs?

Before I start telling you the story, let me describe how it looks like. Mahi motif is composed of a flower surrounded by two or a couple of leaves. I was wondering why it called fish but there isn’t any fish (Mahi) in it?! 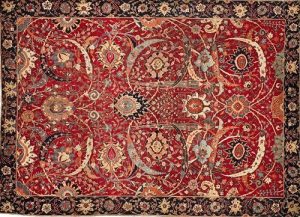 People have always wanted to explain what they see every day, so they create stories about different Gods and goddesses. One of these stories is the story of Mehr or Mithra the god of light, oath and covenant. Mehr is the protector of truth and all good things in the world, so based on legends Mehr was born in the water on a lotus flower, and there were a  couple of fishes for taking care of the newborn god. some researchers believe that people used to simulate this legend by weaving a human face in the middle of a flower with some fishes around.after the rising of Islam and the rule of Muslims over Persian artists were not allowed to create artworks including human and animal bodies or faces, therefore Mahi(fish) motif changes into a simple flower which is representing Mehr surrounded by a couple of ordinary leaves instead of actual fishes in weaving carpets. as long as fish or Mahi (in Persian) is a holy animal both in Islam and ancient Persian religion(Zoroastrian) and culture, the name Mahi means fish did not change.

So just like every motif in Persian rugs, Mahi (fish) motif has its own story behind it. this motif was extremely important for ancient Persians as they have drawn it many times in different places. they even had semi-human semi-fish Gods based on Assyrian and Sumerian documents. Next time that you are stepping on a Persian rug designed by Mahi Pattern, you know about the motifs that are all over the rug.